Multiple times individuals have contacted me through social media and online venues inquiring about what to do now that they believe they have Asperger’s Syndrome and/or that they are autistic. Whether or not to seek out an Autism Spectrum Disorder (ASD) diagnosis and how to go about finding a professional to assist in the evaluation is a very personal choice.

The benefits of confirming an ASD diagnosis are numerous; however, there are often pitfalls along the way to finding a well-informed mental health professional, such as not being believed, not being taken seriously, or misdiagnosed. The added anxiety and frustration and sometimes shame, that can result from seeking out an “official” diagnosis, is oftentimes counterproductive and adds to the misgivings and wellbeing of the person seeking out assistance.

When I first suspected I had Asperger’s Syndrome (age 43), I called multiple psychologists within a one hour driving radius from my home. This was in 2012, when not much was known about Aspergers, particularly related to females. Today, people are still struggling to find professionals in the mental health field who are trained in how aspects of Aspergers and autism conditions affect females (and some males or non-gender specific individuals).

When I phoned around in search of assistance of an Asperger’s diagnosis, I asked the following questions:

1) Do any of the psychologists specialize in Asperger’s Syndrome?

2) Do you know of any other psychologists in the local area that specialize in Aspergers or autism?

3) Do you have any female clients with ASD?

Some of the office receptionists hesitated answering my questions, due to confidentiality laws, but usually they were able to respond in a non-direct way that proved helpful. Then again, most of the responses were typically “no.” Eventually, after several months of numerous phone calls, I came across a psychologist who had ASD clients. At that point, I asked if I could send information online that I had collected about females with Aspergers. And, from there, I set an appointment date and was seen.

Some individuals seek out a psychiatrist for an autism diagnosis. My friend has had success taking this route with her children. Whether to seek out a psychologist or psychiatrist is a personal choice. Some folks begin the diagnostic journey with their general medical health practitioner, the doctor they see for common day ailments. In my experience, most medical doctors will not know who to refer a person to for an ASD diagnosis and will not know much, if anything, about autism and how it relates to females. If a person is setting out to receive government assistance or school assistance, based on a disability of autism, it is best to find out what those agencies require for an official diagnosis.

There is no set test for Asperger’s Syndrome or ASD; however, mental health practitioners will refer to the DMS-V, take into account the client’s personal history, and perhaps query family members, teachers, and/or past mental health therapists. Some psychologists and psychiatrists have established checklists and/or key traits that must be checked off for consideration of ASD. Generally speaking, social anxiety and behaviors that affect day-to-day living are key markers. Some mental health professionals will confirm an “Aspergers” diagnosis, but include the diagnosis under the umbrella of “Autism Spectrum Disorders.” Others will officially diagnose a qualifying client with autism, even as they present as Asperger’s, due to the DSM-V’s specifications. Some will apply levels of autism (one through three) based on a person’s coping abilities, support systems, and challenges.

A person can verify a strong suspicion of autism or Asperger’s Syndrome through meetings with a mental health therapist, social worker, or the like, and sometimes this is enough to bring about closure and needed answers and assistance. However, unless the diagnosis is determined by a doctor in the field of psychology, the diagnosis is not “official.”

Often mental health practitioners still mistakenly think that in order to have Asperger’s Syndrome or autism a person must present with 1) limited eye contact, 2) lack of imagination, 3) lack of empathy, and/or 4) failure to succeeded in relationships and/or a vocation. Time and again, these stereotypical ASD characteristics have been disproven by professionals in the field of psychology and autistics themselves. While a couple of these aspects might hold true for a handful of autistics, many adults on the spectrum have trained themselves to look at someone in the eye or at forehead-level (even as this is often an uncomfortable practice), are extremely empathetic (sometimes to a debilitating degree), have a vast imagination (and creativity), and have sought out meaningful relationships and developed skills related to a specific vocational interest or hobby. If a mental health professional claims a person doesn’t have Asperger’s Syndrome or ASD because of one of these aforementioned reasons, I would suggest seeking out another professional, one who is well-educated in the subject of autism.

For those that are considering they might be on the autism spectrum, I have written and/or gathered some resources that might be of interest:

Professionals Often Miss the Mark in recognizing autism in adults

More traits of those of us on the autism spectrum

10 Myths about Females with Aspergers Syndrome 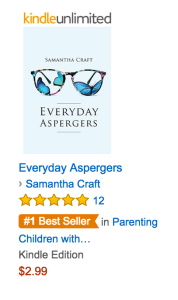 Samantha Craft is the author of Everyday Aspergers. Ten Years in the making, Craft’s book has positive reviews and support from professionals in the field of autism and autistic individuals. Craft is in touch with thousand of autistic individuals throughout the world. Her book is available on Amazon in softback and as an ebook in many countries. Sam on Goodreads. Sam on Twitter.